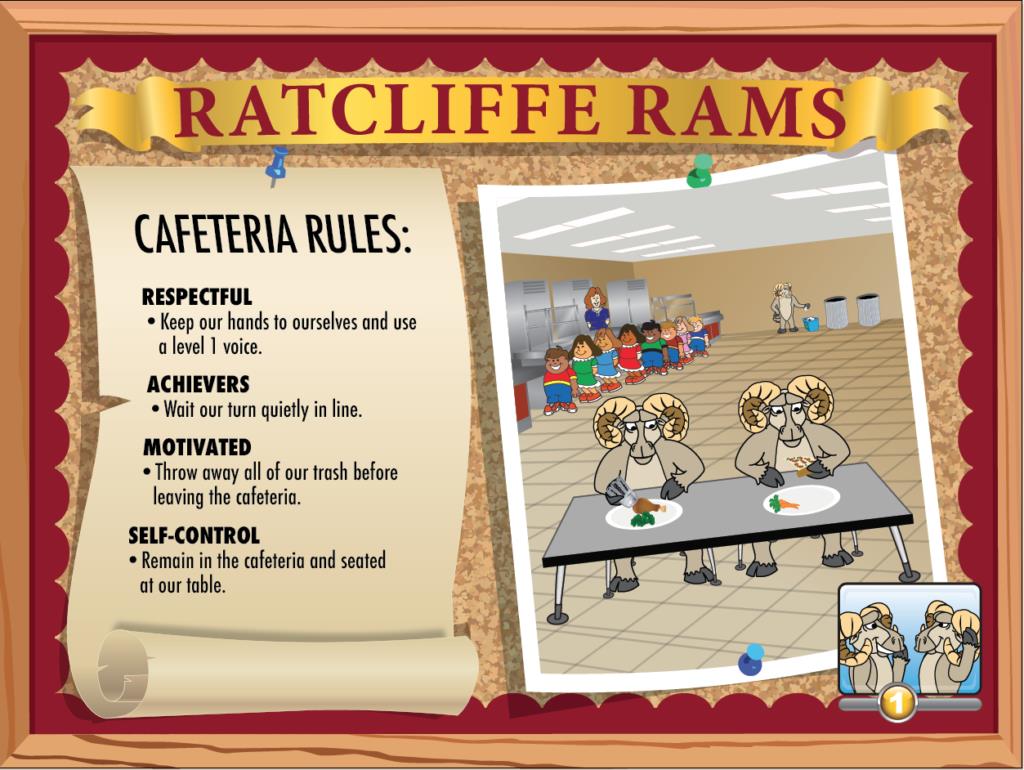 6. Keep it simple. Make it easier for young children to remember the rules. According to the OSEP Technical Assistance Center, at least 70% of 15 or more students should be able to state 67% of the rules. 90% of the staff should also be able to state 67% of the rules. As a general rule, try use no more than three rules per expectation, per area. If you have four behaviors in your acronym (or theme), and three rules/expectations for each, across eight different areas of the school, you can end up with more than 90 rules in your matrix. That’s a lot for a child to remember. Keep the language brief, and to the point to make it easier to absorb and recall. Rules posters help break your matrix up into smaller pieces that make the information easier to digest and remember.

7. Keep it positive. Always describe a positive behavior, not behaviors that you want to avoid. For example, “Throw trash away in the proper receptacle” is better than “Do not forget to throw your trash away.” The second statement actually paints a mental picture of forgetting, whereas the first statement creates a mental image of the desired action.

8. Use picture words. Strive to create mental images of the desired behaviors when writing your rules. Avoid using the word “don’t.” There is no picture associated with it, so when you say “Don’t jump off a cliff,” all it does is create a mental image of jumping off a cliff. A better way of communicating the point would be to say “Stay at least 10 feet away from the edge of the cliff at all times.” A shorter version would be better for posters because space is limited, and it’s human nature to skim copy, rather than read every word. “Stay away from cliffs” would work well.

9. Be inclusive. If you use photos of children and staff members to showcase positive behaviors, make an attempt to represent all sexes and a variety of ethnic types. One big advantage of using your school mascot as the visual role model is that it is non-sexual, non-ethnic, and totally inclusive.

10. Use caution with photos. Avoid using photos of your own staff and students. People are flawed. Things happen, and if a featured student or staff member has a less-than-stellar episode, it can taint the positive image you are trying to project in your posters. Again, this is another advantage of using your school mascot as the behavioral role model.

100 kid-friendly mascots, each with:

If you can't find your mascot, we can either design one for you, or work with your existing mascot.